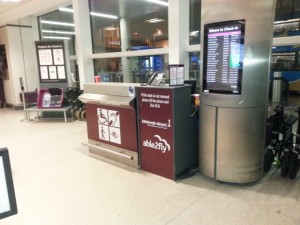 Recently, the aviation industry press has been commenting on fines issued to three EU airlines by the US Department of Transport (DoT) totalling $500,000 relating not to the quality of the PRM service given, but how they dealt with “disability related air travel complaints”

In mitigation, the airline claimed that it “frequently must depend on outside vendors not subject to its direct control when assisting passengers having disabilities to navigate through airport terminals” and that “when responding to complaints filed by passengers assisted by these vendors, it relies on those vendors to explain the factual circumstances surrounding passenger complaints in order to provide timely dispositive responses”.

These claims of mitigation were dismissed by the DoT and fined were issued but it made us think;
– how prepared are we on this side of the Atlantic?
– what rules apply to complaint handling?
– What action could airports & airlines be taking now to avoid similar problems

Currently the NEB’s (National Enforcement Bodies) seem to be encouraging “best practice” approach but with PRM numbers growing rapidly, how long before encouragement becomes enforcement and will that enforcement fall on the airlines (who usually receive the complaints) or on the airports (who are responsible for the service)?

It won’t be an acceptable defence to issue the usual statement that an organisation “takes seriously its responsibilities and obligations” with regard to PRMs. Neither will it be possible to pass on the ownership of the problem to a 3rd party contractor – the letter from your local NEB won’t land on their desk.

Let’s try to offer some ideas for making sure your organisation is well prepared.

As the people responsible for the on-the-ground part of the PRM service, Airport Managers need to take steps to assure themselves that;
a) there is a formal procedure for complaint handing with responsibilities and timetables clearly defined
b) the data being collected by the PRM Service is accurate and comprehensive
c) records relating to individual PRM journeys are quickly accessible in the event of a complaint
d) there is a Continuous Improvement process in place, and
e) all the above is supported by a Management Review process and appropriate staff training.
Airports already have management systems in place for Safety and Quality, it’s just a case of applying similar thinking to the PRM Management system.

Having these things in place can’t guarantee no complaints, but it will leave your airport better prepared to deal with them in a timely and professional manner

We use cookies to ensure that we give you the best experience on our website. If you continue to use this site we will assume that you are happy with it.Ok